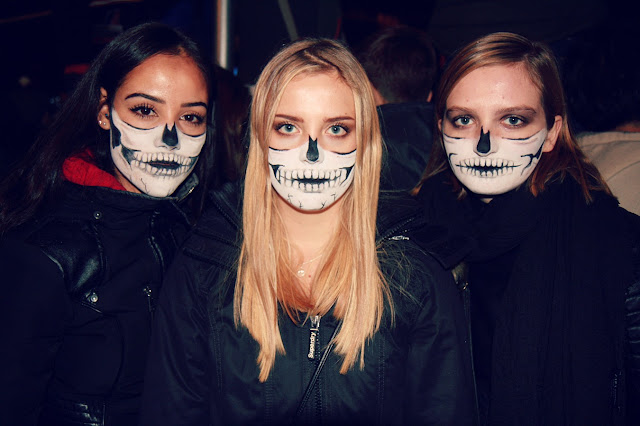 You are probably guessing that this post is going to be about Halloween. Even though it is, I would actually summarize it as an week of "waiting an eternity". It started on Wednesday, I thought we had missed the Haunted House on campus but it turned out that it was open for two days. Therefore my two comrades and me were very excited. But as we approached the area where it was supposed to take place we were sadly surprised by how long of a line there was to get in. I mean it was just organized by the campus so how long could it take, right? Well the answer was quite long, two dreadful hours of waiting in the freezing cold long. But that held us back, I was still looking forward to it. These kind of things never scare me really, I am to much of an realistic person to actually believe in this stuff. My company on the other hand felt rather negative feelings about the whole thing, which made things even more fun, for me. As we tiptoed in we were amazed by all the decorations, they put a lot of effort in it. Although it wasn't scary because you could recognize all the faces it was still fun. I got a good (jump)scare and laugh out of the whole situation.

We had a months previous signed up for the hayride, hence I almost had forgotten it was happening. I am guessing you can see this one coming, but yeah I am glad I did not. It was was in Sleepy Hollow which is a suburb of New York City. We got there by taxi, walked to the building from where the tilt car would leave. And to all of our predictions in, surprise (not) there was a line... There we stood again waiting and waiting. In the and it was nearly two hours, again. It was a very typical american thing to do. You sit there on the trailer behind the car on a layer of hay. The first part of the ride was in complete silence trough a creepy graveyard. After that you enter a decorated Halloween lane. On the sides of the rode there where people dressed up as horror movie characters, zombies, clowns etc. although I must clarify that the 'scariest' of all were the children. They were quite something. We complimented a zombie/vampire mom with her beautiful newborn and headed out of the horror story and into the real world. All the houses were brightly lit, and I wish I could say that the night ended there. Sadly it did not. We got into the taxi which soon-ish arrived to pick up us up. Without thinking otherwise we stepped out of the car after arriving back at the campus. Then the angry taxi lady started screaming at us, claiming we hadn't paid it. Yet we had, thus we went to the security who handled everything. Shoutout to you Tommy, you tha' man. 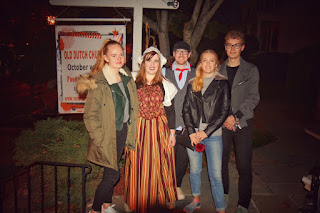 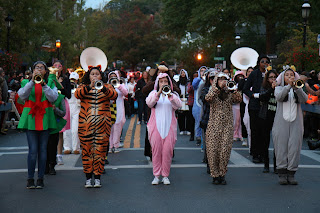 Saturday we went to the Tarrytown Parade with the Photography Club. It turned out not to be much, it was just fun to hang out with the girls and the annoying security gard right in front of us. There were a couple people dressed up in our traditional dutch clothing. They were form the dutch church, which apparently was a copy of the church in Bolsward. We demolished some froyo and called it a day.
A very long bus ride is what we started sunday with. Because we were going to Six Flags! What is rated as world's biggest amusement park. Always fun. Always busy. We got there expecting it to be very cold and very rainy, that is what the weather channel had stated. Gladly for us they turned out to be wrong. I was sunny, like 25 degrees celsius sunny. My friends and me went straight to the first rollercoaster of the day. It was called superman. Why? Because you where literally in the position of which superman flies. 45 minute wait further there we were in the front cart. Bas and Tosca decided not to go for that much adrenaline for they were kind of terrified. That turned out to be a good thing because he passed out during the ride. Renee and I needed to wait to more runs before we could go on. But than the time came, and there we hanged in horizontal position ready for take of. One, two.. nothing. We stopped two meters from were we began. For fifteen minutes we just hanged there kind of enjoying this unusual situation, making fun of things with jokes like 'don't leave me hanging bro' and 'just keep swimming'. The american couple next to us found it very amusing. Than finally there was movement. We were the literal guinea pigs of the operation, because after our ride the divided it maybe would be smart to do some test runs. Yes great thank you, very much appreciated. Next was the green lantern, it was a coaster were you stood on your feet the whole ride. After that the second fastest and highest of the world was next in line. One and a half hour later we were fired of up into the sky. I seemed endless for those 21 seconds. The wooden roller coaster el toro (the bull as my Argentina friend kindly stated) would be our final one as decided. We could see the rain coming but there remained hope in our desperate eyes. One hour later we were in front again, and without there being one drop of rain the broadcast man thought it was funny to close the ride due to weather related issues. On top of all he told us to maybe enjoy the teacups or carousel. We slowly strolled back to the bus luckily not completely soaked (it had started to pour with rain outside) and broke our necks trying to sleep on the way back. Missing everything that was supposed to be fright fest about the evening. 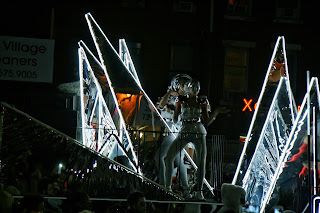 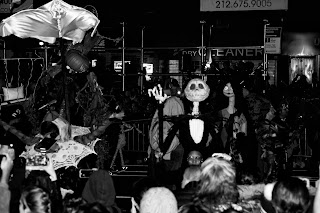 I had thought my Halloween journey ended there. It thought wrong. Late in the morning I decided to join the rest of the Dutch gang in attending the annual NYC Halloween Parade. Before this day I had never dressed up for this holiday and I couldn't let this opportunity pass. Thank you Charissa for doing my face paint, it looked amazing. I already knew what I wanted. A couple of months ago I had seen a girls on Instagram with the half skull face and knew immediately it was meant to be. Sieske wanted it also and the creator herself as well. We barely made it to the train, being tight on schedule due too make-up related issues. But there we stood or hanged more or less, at the parade. It looked like the whole of New York plus some gathered on the streets because I had never seen it this crowded. We climbed onto the scaffolding to get a glimpse of it all. Which somewhat worked out. I just liked that most people made such an effort to look great. After being crushed to death and therefore resembling what I had on my face we found ourself back on the train only wanting to just go to sleep. That is precisely what we did when we came back. And there my Halloweeny week in the US ended.