A freezing day in NYC #NYCLife12 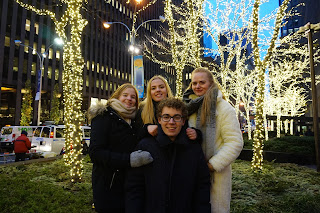 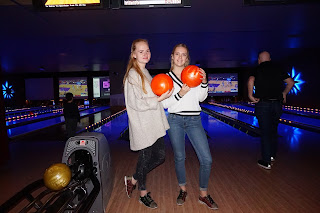 I used to think that bowling was a thing I could do. Well apparently not.
We decided to go to the mall on Saturday for Renee her birthday to go bowling. We got a smoothie and did some Christmas shopping. We bought a tiny cute silver tree and some decorations for our dorm room and it really got me in the Christmas spirit. Once we got to the bowling alley, we were only allowed to play one game because there was a party being held there later on. Bas was terrible at it so he lost. Yuma, whom I thought had never bowled before actually had, she became second to last. Then there was me perfectly in the middle... I threw one strike though. Renee ended up scoring second place and Elien got first place.
We went back to the campus and hung out for a little while, and soon it was late in the evening. On every floor of our campus building there is a lounge, we went to ours and waited till 12. Renee her helium balloons were a perfect entertainment. I sang her happy birthday, twerked with Bas and Iris, and laughed a lot. Probably because I was tired and also it was likely that the helium had effected my brain cells. 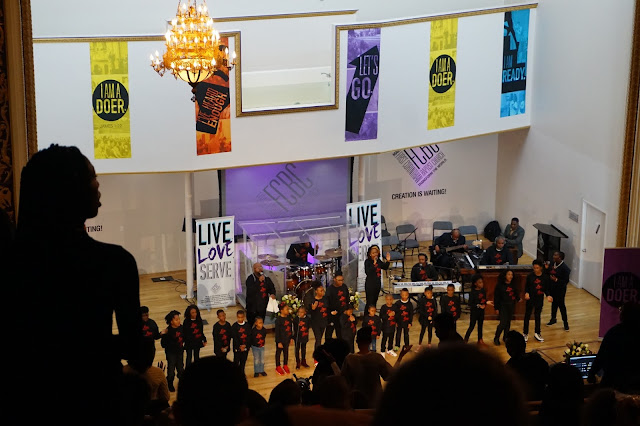 The alarm went of at 8:15 the next day. It was terrible, but somehow I did not feel as tired as I should have been if you look at the amount of sleep I got that night. Which was 4 by the way. It was unbearably cold outside and my ten layers of clothes did not keep me warm. However you can blame me for that because I do not own a beanie or cloves as of yet. David from the activities showed us around Harlem. Renee and I got a little private tour of the borough which was cool. He told us all about how Harlem isn't in reality that bad, generalization just made it up to be. The church where the gospel choir would be singing looked kind of moldy and abandoned from the outside, but when we entered the building that image was complete overruled by the golden decorations and chicly dressed up women and men. The whole thing lasted for over three hours and none of them were spend listening to the chior. I was kind a mad about it but on the other hand not really because it really was a experience so to speek. We walked out and saw at least thirty fire trucks and police cars outside. Apparently a building had collapsed. I felt sad, such a place of love like I had just seen deserves more than what there given.
I hadn't eaten the whole day yet because we were not able to have breakfast this morning, so you can imagine that I was very very hungry. Renee wanted to go to by CHLOE (you know the vegan place we always go to) but than the sweets version, it was her birthday after all. I ate the best cookie maybe ever there. It was a really big, warm and chewy on the inside crunchy on the outside chocchip cookie.
The plan was to go iceskating in Bryant Park, but the cold denied us the pleasure (seriously it felt like minus 20) so we decided to go to the movies since it would be warm there. We went to see the edge of seventeen because it was on our list of movies we wanted to watch. If you like sarcastic, dark and harsh humor you will love this movie. I did.
Even though it felt like we were on the north pole it was still a pretty good day to end the week.