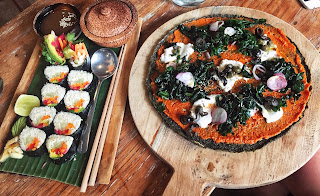 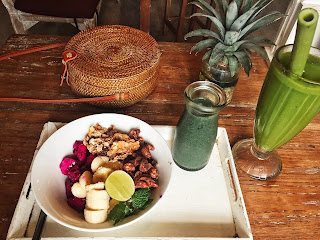 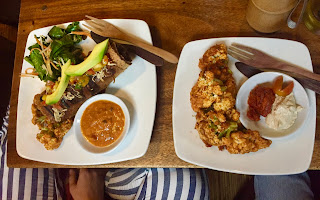 Me and my travel friend visited Ubud for a day. We did a tour to see all te amazing spots like; waterfalls, rice fields, monkey forrest and temples. As well as a little food tour to see what all the vegan cafe's in Ubud had to offer. The once we went to worth mentioning were Alchemy (top pics) and seeds of life (bottom pic).
Alchemy:
Alchemy was a raw food cafe/shop/yoga studio, they had a wide a sortiment of foods. Including a salad bar, smoothie bowl bar (which I had, you got to chose your smoothie and fruit/toppings of choice) and a menu cart from which we shared te raw pizza and cauliflower sushi. Wow that was pizza was just amazing and very filling. The sushi was okay, I just prefer real rice sushi. The smoothie bowl was also delicious and fun because I got to chose every element I wanted in there.
Seeds of life:
Here we went a couple of times just to get dessert, they had a assortiment of raw cheesecakes which we just couldn't keep ours hands of off. The right were the cauliflower buffalo wings which were really tasty but a little to "under cooked", I get it its raw (not cooked above 40 Celsius) but still not entirely my thing. The left was a burrito filled with just all the veg and a nice dip on the side. I enjoyed it but I could've done with a bit more sauce, it was a tat dry.
The atmosphere was very serene. You had to take off your shoes to enter and could sit on a bench filled with cushions, it really zen. 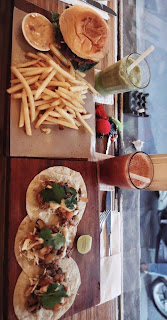 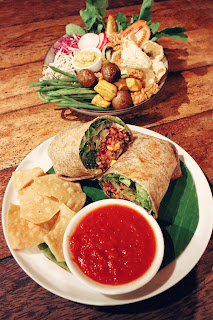 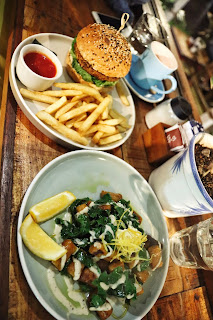 To not make it a very long review I'll keep it short and simple with these three.
Betelnut cafe (changgu):
This is not a vegan restaurant but they are very open to it and can make almost every meal vegan. We had a buddha bowl which was good but a bit simple and a burrito that deservers for sure a recommendation.
It is usually quite busy so we didn't sit there for long. Didn't feel like the place you can really chill/talk and eat, more of an eat and go situation.
The shady shack (changgu):
This was one of our favorite restaurants, they had silky latte's and lovely carrot cake. The two vegan burgers they had where also finger-licking good. The gnocchi however a bit to sour from the lemon but eatable.
The shack really feels like an upgraded beach hut, there is a big tarras with cosy sitting spots and inside the shack there is bar settings which overlooks the rest. The vibes are very chill and the music is great. We loved just chilling here.
Sea Circus (seminyak):
Also not a vegan restaurant but they had a taco-tuesday deal with jackfruit taco's so we had to give it a try. We shared the taco's which tasted very sweet/salty and pleasurable at the same time. The vegan burger was appetizing but the crunchy fries where the show stealer. They also have a good cocktail menu!
This restaurant is known for there colorful outside graffiti wall, however inside is just as colorful. Decorated in an old school diner kind of way. Serves great as a family going out for dinner spot.

That was it for today! I do still have one more post coming up so we won't have to say goodbye to bali food just yet.