- June 01, 2019
Hey food truck lovers, it's me again with a new review of vegan food.
On June 1st two fellow vegans and I went to Rollende Keukens Festival in Amsterdam. It was located outside Westergasfabriek. Prime location for organizing such an event, especially with the beautiful weather we had!
The day was filled with consuming food joyfully without any suffering involved. We tested 10 of the Best Vegan options. Critiquing them on looks, overal taste, low waste and the ability to somehow consume it with grace. 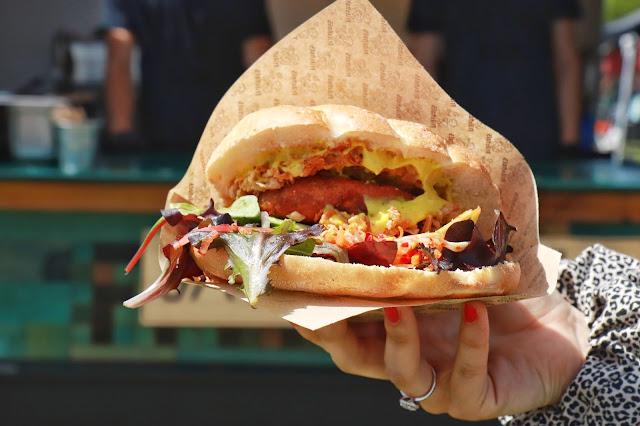 Okay we can all see this burger is very aesthetically pleasing, no need to further discuss that. You just want to inhale it in one go. Although that wasn't entirely possible because it was a bit messy to eat. The jackfruit was made into an actual burger, not just some loose pieces you sometimes find. Topped with delicious kerrie mayo, crispy onions, sriracha and some veg. The burger bun was plain but it paired beautifully with the burger. Now the inside could truly shine. It was served in a paper servet, as minimal waste as possible. Applaude for that. On the other side they did have to research where jackfuit came from. Made us kind of suspicious. All is forgiven though because the guys serving us were rather hospitable. 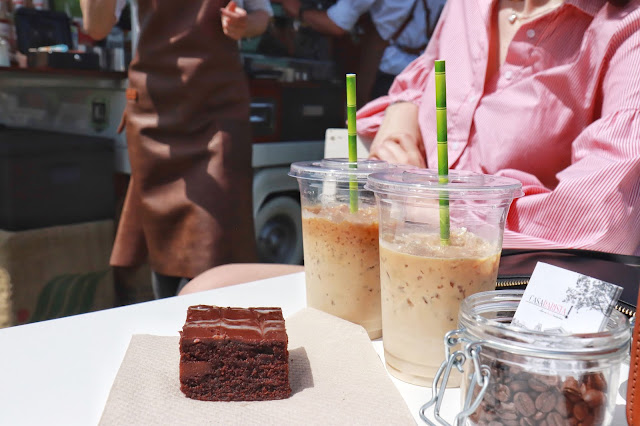 After the burger we felt like drinking some iced coffee because it was 25 degrees and we were nice and toasty. With it came a vegan brownie. It did melt a bit, but hey so were we. The coffee itself was flavorful, although it was served in plastic cups. But then again it had a paper straw, compensation I guess. The brownie was fluffy, moist (I know everybody hates this word, it's just the perfect way to describe it) and not overly sweet. Fast service and a rustic looking truck. Ok next. 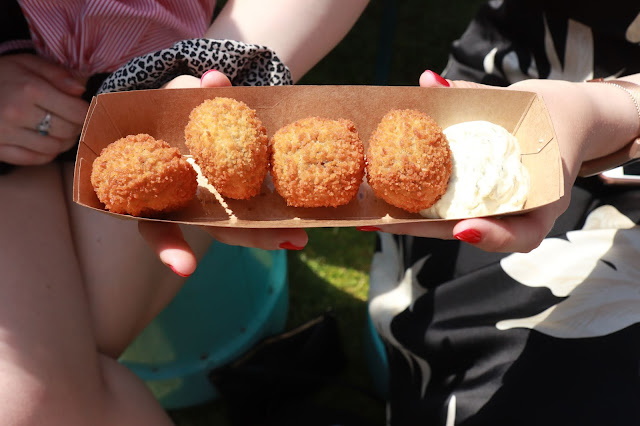 Next we shared 4 weed bitterballen. No calm down, not actual weed but seaweed my friend. The crunch was real with a warm soft comforting ragout on the inside. The seaweed bits were visible and the fishy flavor was there but pleasantly subtle. It was paired with an original sauce which could have been a bit more tangy. Service was slow but the big food truck made up for that with its looks.4.0 Looping Good 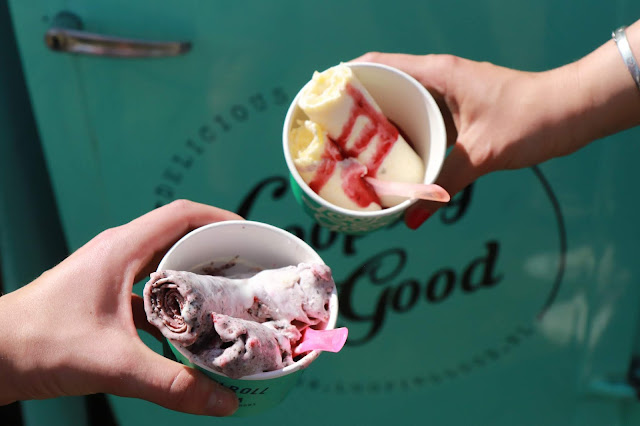 Aside from being an instagram sensation these rolled up ice creams were yummy. I filmed the whole process cuz yes I'm that bitch, find it on my insta ;). It took some time, a bit of commotion and the portion sizes did differ, however the end result was great. The flavors where: pineapple/mango with raspberry sauce and strawberry/oreo with coconut sauce. Perfect combination if I say so myself. They came in paper cups with plastic spoons, again compensation?.. 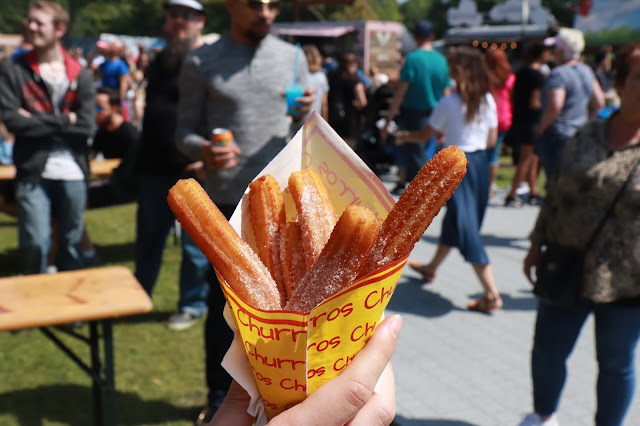 What can go wrong with churros? Actually quite a lot. Too dry or cold etc. With these though, the opposite occurred. They were crunchy on the outside and soft on the inside. Warm but not too hot. Glazed with cinnamon sugar. Is your mouth watering yet? Mine is.
we didn't;t have to wait very long for them and they came in a paper baggy with an extra napkin, which we didn't need. Minus point for that. Overall a great experience. 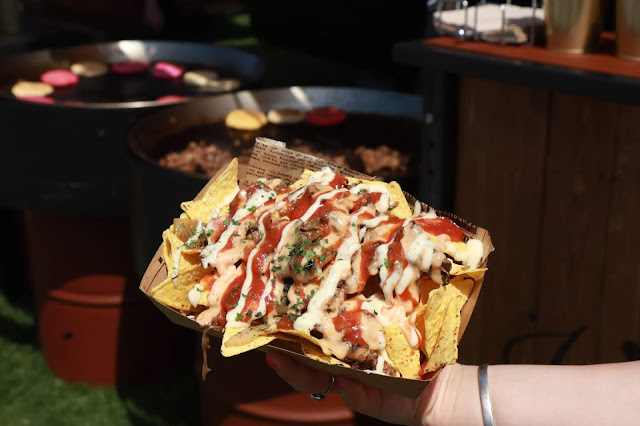 At the giant Watson truck, which looked amazing, we shared the loaded nachos. They also serve arepas with philly cheese topping. I need to try that next time, or if you do let me know how it was. Thanks. The nachos were heavenly. They could have given us a bit more of the topping so that the ratio would be more balanced. However the topping that we did get was devine. It was made from mushrooms, caramelized onions and some sauces. Even mushrooms haters will like this, trust me my fellow judges aren't as keen on them as I am, but even they loved it.
Served in a paper tray without any excess waste. Quickly as well. This might have been our favorite along with the burger. 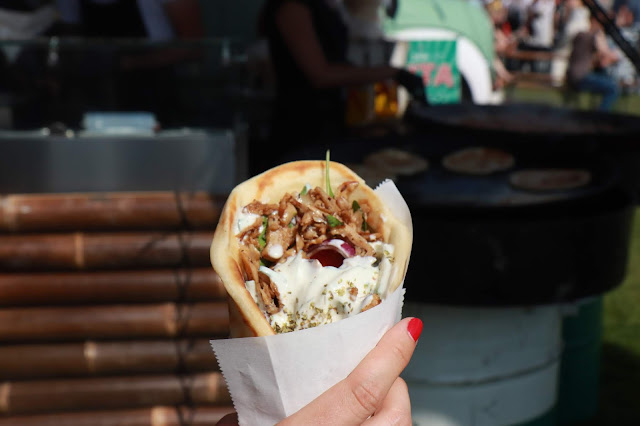 I think this was my first gyros experience, therefore it might be arguable that I'm not the greatest judge for this dish. Luckily for you my companions are. They said the garlic sauce and other toppings were spot on. The gyros to bread ratio was well balanced and with the seasoning it tasted just like the real deal. The fake meat, which I am the right person to state my opinion for, was appetizing. It had the perfect texture and just tasted great. Again single paper wrapper, nothing to complain about here. 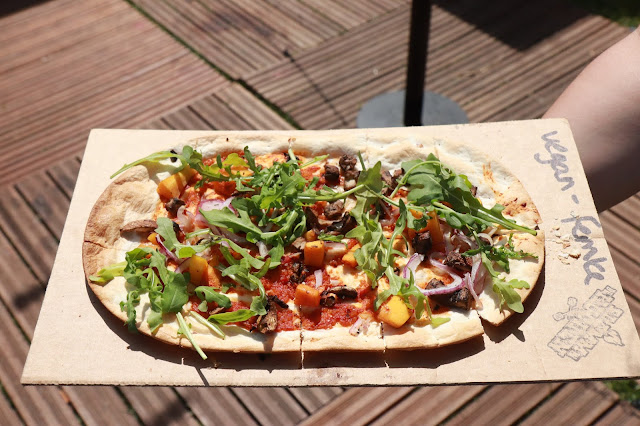 I'm going to keep it short and simple for this one. It was a let down. First of all it took some time to arrive but when it did, it lived up to my expectations because the crust was good. However the toppings, which on their own were enjoyable, were rather scarce. This made it all quite dry. Yeah very sad indeed. 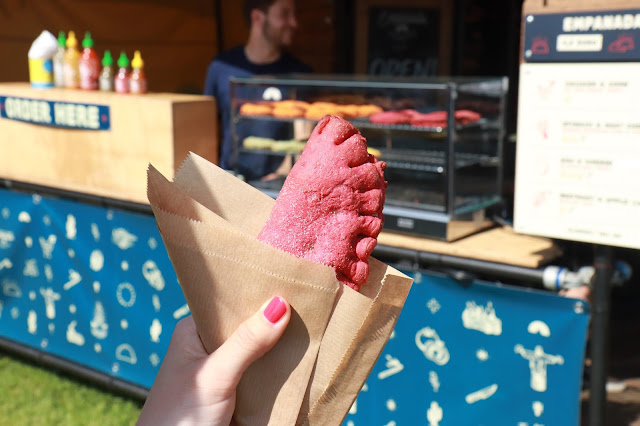 This delightful pastry was served in a paper bag freshly out of an amazing and authentic looking wood oven. The dough was flaky, crispy but still soft and the insides were apple, beet and cinnamon. The outside looked pink because of the beetroot I imagine. Very appealing. The service was brisk and once we sat down we had a lovely little chat with one of the guys there. Adding sauces is possible, not necessary. 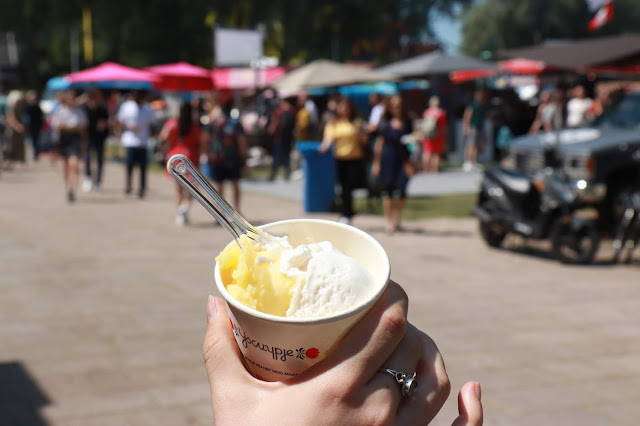 To finish it all off we had two scoops of ice cream. The only two vegan flavors were orange and rosemary (sugar free). Swift service, well adjusted teamwork and again the compensation of paper with plastic. Seriously what's up with that, just give me a wooden spoon already. We could have brought our own now I've come to think of it.. Next time.
The orange was fresh, sweet and a bit sour in a good way. The rosemary one was creamy, silky and with a subtle hint of coconut and rosemary. It truly was a match made in heaven because I came to the conclusion that the the pairing tasted exactly like a split! Or orange cream bar for you uncreative Americans. So if you try this, definitely pick them both and tell me that I'm not the only one realizing things. I mean this.

Special thanks to my sponsors, with whom this post was made possible by helping me eat through all this amazing vegan food and paying for 2/3 of it. Love you.