What I ate in Cuba

- October 13, 2019
Hello!
It's been a while since we last spoke but I think this post will be a good one to catch up ;)
This summer I went to Central America including Cuba. As you could probably guess by now, this is a what I ate there as a vegan.
As predicted it was quite hard. For one, Cuba doesn't really have import, therefore they only eat what they can grow. Secondly, Cubans looooove their meat/fish and cheese.
Luckily there is this space age technology now called the internet. So I could do all my stalking beforehand.
The one I'm going to talk about first was based in Vinales called Finca Agroecológica El Paraiso AKA organic farm.

We arrived after cycling thirty minutes in 40 degrees celsius heat up a steep hill. The view was amazing and made it all worth it. We were sat at a table overlooking the valley and organic farm where birds flew from palmtree too palmtree. After asking if we could have the lunch vegan they gave us a so many plates full of fresh organic food. Including drinks it only cost 11 per person (the food in the picture wasn't even all of it).
The plantain, vegetable soup which I paired with the rice and beans and guacamole where my favorite. The rest was also amazing, you could really taste that it was from farm to table.
With our bellies full we went on our way back, as happy as ever. 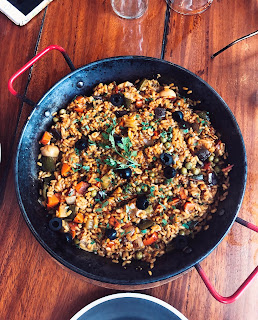 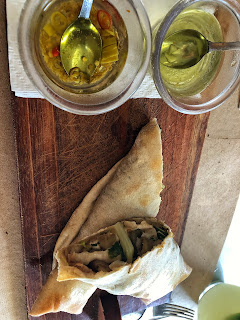 After being lost and getting really hungry we stumbled upon a place where we were told that day had veggie paella. We really didn't care at this point what it was, as long as we could put something in our stomachs. And we were pleasantly surprised. Maybe a bit to salty, however after sweating as much as we did, that wasn't necessarily a bad thing. It had a good ratio of veg, beans and rice. All in all a good meal if you're in search of something to still your bad mood.


This restaurant called La Esquina, has an interesting side story. Let me tell you quickly. We got there as two blonds, immediately stared at. Ordered our food but without cheese, weird looks followed the rest of the night. In the end it wasn't because we order vegan, which we originally thought. but because they well thought we were hot. We got free ice-cream out of it. Bonussss.
The food was okay, could use more pesto. Which we got the next three times we went there, as well as more funny looks. Oh well, some of them were hot so we didn't mind really. 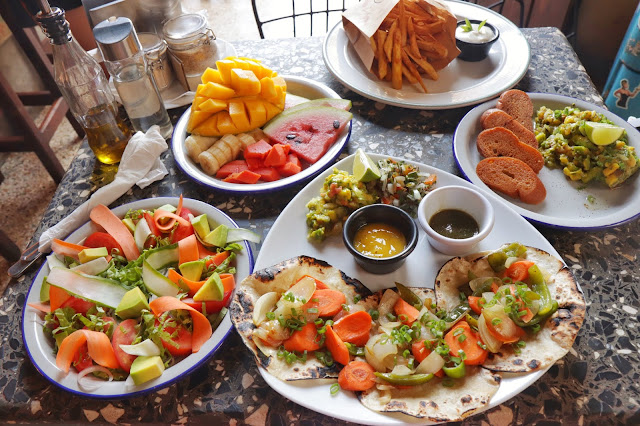 We were walking through the streets of Old Havana when we past this place called El Dandy. It looked artsy and the people there seemed nice. We went in asked for the vegan option, happy that the staff new what that meant, and order basically all of them. The fries were a bit to sweet but I have zero complaints about the rest. We had vegetable taco's with mango chutney and a spicy sauce. Delicious, nice and smokey. I had a salad which was a bit boring but just what I needed for some health. We shared the fruit platter, and croutons with guac and pico de gallo. Can't go wrong with that.

We went back the day after, I think that says enough.

It was a struggle finding food everyday, especially since there wasn't wifi to look up some places easily. However it was an amazing experience getting to try some real Cuban food.
Hope you enjoyed reading yet another food blog.