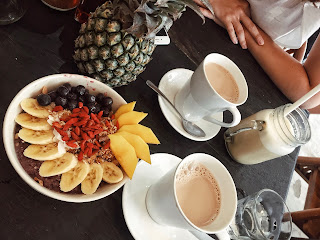 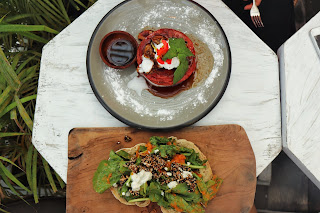 Cafe organic is popular spot in the center of changgu's city life. We went here a couple a times just to take away dessert, we really got addicted to there chocolate caramel biscuit (or whatever the name was). However we did also stop by to have breakfast before going to yoga. We shared the lovers pancakes and the pesto & pumpkin toast. The pancakes were excellent, it had been some time since I last had pancakes so these strawberry pancakes really hit the spot. If you're not to big on sweet pancakes maybe get the toast because they really were quite sweet. The toast was great and not overly complicated. The crunchy nuts with vegan cheese on top make it different from the normal toast. They didn't over do it which was nice, especially as a breakfast.
As our last proper meal we went back to get some latte's and a acai bowl. The latte's were good and the acai bowl as wel, very much liked the toppings and the acai itself was very fresh. For sure a good meal to end off with. 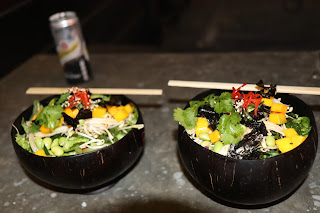 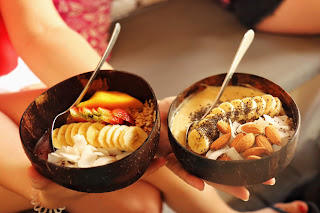 Poke poke was recommend by a blogger online saying it had good vegan poke. Me having spent three months in Hawaii, the origin of poke bowls, I was a tat hasitent to try it. I was right in doing so, not impressed at all. The taste was okay and that pretty much sums it up. It also didn't fill me up which I hate because I really dislike going to bed still hungry. Although I must admit that you could choose the base of the dish, quinoa or red rice.
Nalu bowls however was a hit. You could choose from 6 different bowls all named after iconic surfing locations. I opted for the Uluwatu without honey and it did not disappoint. The bowl was not overly sweet and the home made granola is definitely a hit for me. Nice and crunch but not overpowering. My friend had the pipeline bowl with aded almonds, which was delisch as well.There are multiple locations in bali where you can get them, all quite instagrammable. We went to the one near echo beach. It was quite small and if it is busy you could have trouble with setting, we didn't though. 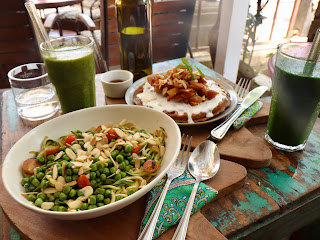 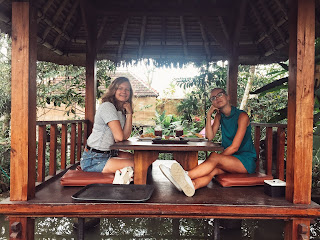 Doest that wafel just immediately catch your eye? Well sorry but imma start with the zucchini pasta. What a tease am I. The pesto zucchini pasta with crunchy almond flakes and tomatoes topped with green peas was nicely seasoned and light. But because of the added protein not so light that you were left feeling unsatisfied. Overall a very fine choice as lunch.
The protein waffles I can not recommend you more. We opted for the plant protein with coconut yogurt and cinnamon-apple-almond topping.  It was served warm, they make it fresh, which added immensely to the eating pleasure. It was sweet but not overly sugary. It had a nice crunch on the outside and was fluffy on the inside. We came back for more, however they didn't have the vegan option anymore so we decided on the sweet potato version. Not as satisfactory as the previous, a lot more dense. However still wonderful. Only downside is that because they make it fresh, you might have to wait a while. I'd day it's totally worth it though.

My parting tip would be to visit a local restaurant were you can enjoy the indonesian food in a very cultural way. We sat in a tiny hut above a stream next to a rice field. Even though ordering vegan was quite the sport it was still a very cool experience. One I would have not wanted to miss out on.

And that concludes the bali food tour series. I could cry/sob/weep, just all the tears. Maybe a bit dramatic but I just love food so much..
Hope you found it somewhat useful or fun to read. See ya for the next food series. It's definitely coming.