What I ate in London

- December 13, 2018
Hey hey, me again. I went to London for a long weekend to visit a friend of mine who is doing an internship there. We had an amazing time and consumed a lot of food. Check it out! 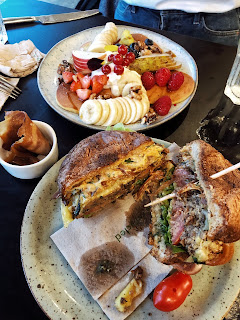 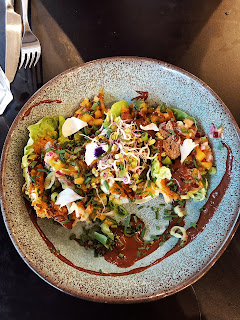 I really wanted to eat here because maybe you know him, maybe you don't, earthling Ed opened this vegan restaurant in Shoreditch. He is an animal rights activist who I follow on insta. I find him ver inspiring and he has a great way of spreading the vegan movement. So me and my friend whom I was visiting went to check it out. We had the raw taco's as a starter which were okay, my friend loved them but I found the chocolate sauce just a bit of an odd combinations. Not really my thing. As mains we shared the fruity pancakes and the surge burger with added cheese and bacon. The pancakes were exactly the right amount of sweet and I loved all the ripe fruit that came with it. However the burger blew us away, it was so good! The bacon didn't do much for me but the cheese is really a must add. It made the burger perfect in balance flavor wise, it was also crunchy and juicy and a bit messy. In short, everything you want out of a burger.
Side note; you really do have to book a table since it is busy most of the time. In addition to this it also takes quite a while for the food to come, I don't think the kitchen was ready for this much success. Good sing though, the word is spreading that plant based food can be just as good, maybe even better. 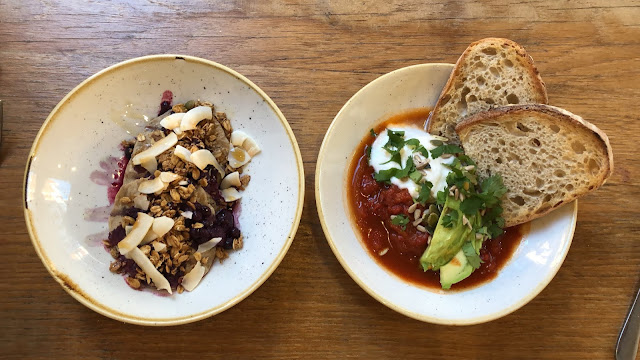 Ella is a vegan influencer whom I also found through instagram. She has a lot of amazing vegan food product on the market and her own deli downtown. I listen to her and her husbands podcast from time to time when I get ready so I only found it fitting to go there for breakfast. They have a whole breakfast bar, a wide selection of treats and a normal breakfast menu. I went for two dishes since they are quite small, don't let the picture fool you. However the price is adjusted to this so I won't say it's expensive for what you get.
I went for the blueberry pancakes and the shakshuka. The pancakes were good, didn't blow me away. The shakshuka, which I mainly got because I had no idea what it was, turned out to be a pleasant surprise. It was a hot tomato salsa with 'sour cream', avocado and sourdough bread. It was so tasty I almost inhaled the dish. A little spicy but not too much, creamy and with the bread the right amount of carbs to fill me up. The place is cutesy decorated and in a very easily assessable place in London near Bond Street. 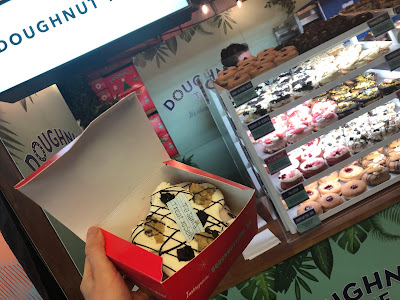 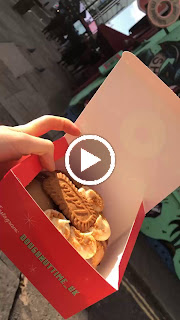 I knew when coming to London that I wanted to get a doughnut. I had seen this place via youtube and knew they had a good vegan selection. So when I stumbled upon a shop at a metro exit I knew it was meant to be. I got the Santa bea bea upon advice from the cashier and she was not wrong. It was vanilla frosting cookie dough and brownie bits flavored. It was very sweet, yes that's the main flavor I got. The dough was soft and fluffy, overall just a very good doughnut. When I walked out I saw an even bigger shop and couldn't control myself, I had to get an other. So I got the coffee flavor. The sugar rush really kicked in at this point and I wasn't able to finish it. However I can describe the taste, which again was very sweet with a hint of coffee and caramel. Yeah I've had enough donuts for about two years I'd say. 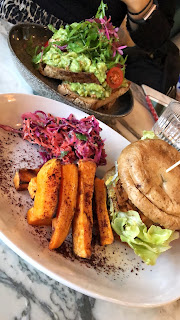 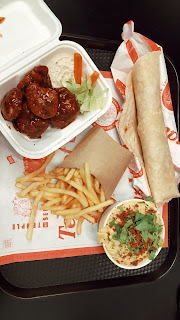 As a hangover meal we decided to go for brunch at Redemption bar, a favorite of my friend. We went for the avocado toast on gluten free bread and the jackfruit burger. The burger was quite spicy and messy since pulled jackfruit isn't really a burger at all but okay it was still great. The fries were also nicely seasoned as well as the coleslaw. The avo-toast was the show stealer for this meal. There was nothing special with the mashed avocado but the bread was just delicious. Seriously I've never had bread that was this good in my life ever, and it was gluten free! Who would have thought, not me. I wish I could buy it by the loaf, because I would have bought to and brought them as my carry on back to The Netherlands, not exaggerating one bit.

Temple of Seitan is a junk food chain in London. We went to the Camden one. My friend got the gluten free chicken warm, it was good, she let me have a bite and some of her fries. Very sweet of her, what are friends for am I right. I got the mac and cheese since I really had a craving for it. They were out of 'sour cream' but i'm actually happy about it. It meant that I got more of the bacon bits and boy they did it for me. The mac and cheese itself was creamy and nice and gave me a fussy warm childhood memory feeling even though I never had mac and cheese whilst growing up. But the bacon bits were on an other level. Don't know how they did it but damn. Furthermore we shared the gluten free BBQ wings. I thought after eating the mac and cheese it couldn't get better, well I was wrong. They were mouthwatering, soul fullfillingly good. Me and my friend took the first bite and looked at each other like 'are we in heaving'? No, but our mouths are. Seriously, angel peeing on my tongue and everything. Just go try them, they were amazing. 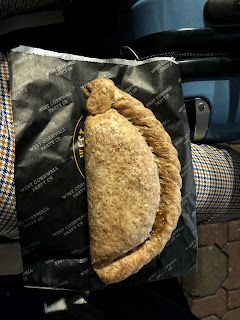 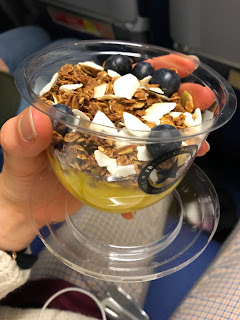 I got a English pasty at a train station, I just wanted to try it out because it's very British. It was okay, I was hungry so it tasted good. The second thing I ate was at the airport where I got a vegan hummus wrap and mango pudding at Pret. They were better than the pastry for sure. I also got a vegan minced pie from costa which I wanted to save for back home but I didn't survive the flight. It was very sweet and reminded me of a little apple pie with raisins, which I guess it basically is. So yeah that was that.

Thanks for reading, hope you enjoyed!